As I began to build my floating crown for Loi Krathong, I thought about what it all meant. Beyond the reason the tradition began here in Thailand, which I've heard many different stories behind from honoring the Buddha, letting go of anger or negative thoughts, all the way to thanking the Goddess of Water, Phra Mae Khongkha (พระแม่คงคา), on to what this might mean to me. I love symbolic acts, rituals that resonate with me, as much as I love being artistic and honoring nature. This yearly celebration, held on the 12th month of the traditional Thai lunar calendar, was shaping up to be a special one for me. 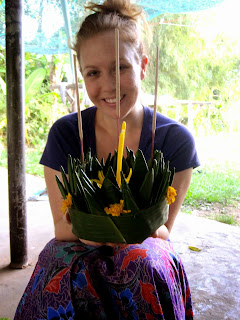 I spent the early afternoon with my host family shaping the banana tree trunk base cut from our own banana trees, cleaning, oiling and folding the banana leaves, and picking flowers from the garden in order to make my krathong (floating crown/decoration/boat). My host and her daughter took time to teach me (and my host's son) how to tear and fold the leaves into different shapes in order to make a variety of decorations, then allowed me the space to create my own as they worked on theirs. The family's boats all had personalities of their own, but as they were made from the same leaves and flowers, they all tied together nicely. When the last of the leaves and flowers were attached, one candle and three incense sticks were added to the arrangements. The bright golds of marigolds, sunflowers, and candles against the bold green of leaves paired beautifully together. 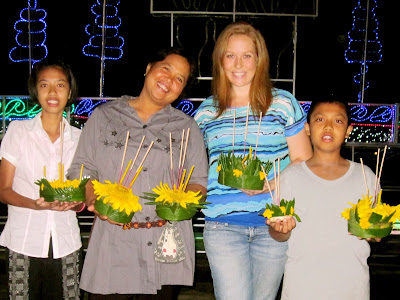 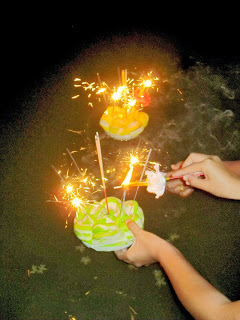 As dusk set in, we loaded our crowns into the back of the truck and headed into the larger town about 25km away to join in the celebration. As we arrived, we found very few people lined up to release their boats into the water thanks to good timing, so we lit our candles (meant to symbolize the Buddha's enlightenment), and incense (to burn away negativity and make room for good to flow), raised our crowns to our heads in a moment of reflection, and offering, then placed them in the water to float downstream together. I breathed in the moment, let the symbolism settle into my awareness, and watched as the candles faded into the distance. 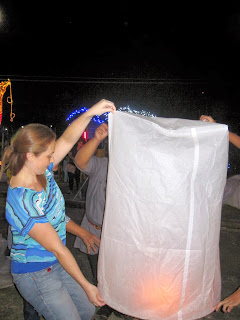 On the field behind us, a woman was setting up floating lanterns to release. Anyone who has done their research on Thailand has seen beautiful photos of these, but to see them in person was another thing entirely. The sheer size of the paper lanterns as they filled with warm air after the disc was lit below was amazing to behold and as it filled enough to release, it was gorgeous to watch it fade into the darkening sky. Much like a child might watch in wonder the first time she let go of a balloon, I was mesmerized. None of the members of my host family had ever released a Khom Loi before either, so we purchased one for 60 baht (just shy of 2 dollars) and stood together holding the lantern as it expanded and released it after a few minutes. Another beautiful symbol of letting go. 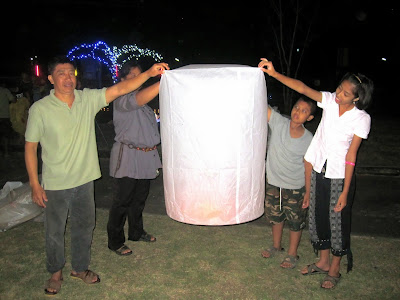 Just a few days later, it was my turn to share an American tradition with my Thai host family, counterparts, and students as Thanksgiving approached. I began with a brief history of the American tradition and then dug into the spirit of giving thanks with my English lessons, guiding students through thinking about what gratitude was, and who or what they give thanks for in their lives. With circle map filled, and sentence frames posted, students let their artistic side shine as they made hand turkeys and filled them with things they gave thanks for. The thoughtful responses and gorgeous artwork gave me a boost that kept me going throughout the holiday weekend. 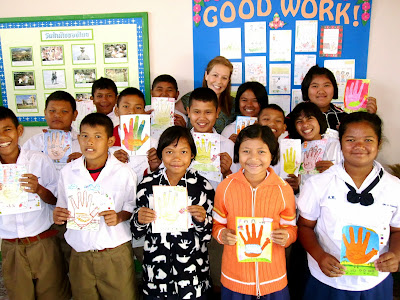 On a side note, the Wednesday before Thanksgiving, I was helping to cook and a pan of boiling oil tipped over on the stove. Without thinking, I rushed to catch it and spent the rest of the evening in the urgent care facility a few villages over being treated for the intense burn that covered my whole right hand. When I arrived at school, hand wrapped like a mummy, my co-teacher thought I was wearing gloves and relieved that I was finally feeling chilly during Thai cold season. I had to explain to her, on the contrary, about my kitchen mishap, and spent the rest of the day teaching about Thanksgiving and explaining how to make hand turkeys, with my deep-fried turkey of a hand. Thankfully, the humor wasn't lost on me, and the pain killers worked their magic as the creams and antibiotics kept me healing. 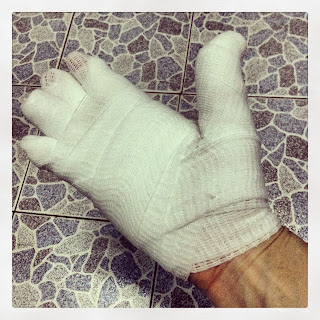